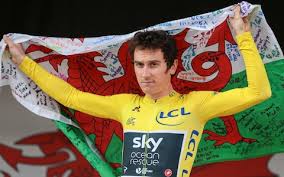 I will often get a client who comes to me with an injury of some kind and will ask when they can get back to exercising. Years ago if you had back ache, the advice was to lie down and rest for a few days. Now the advice is the opposite, get up and move around. This week I had a client, a competitive cyclist, with really sore legs– sore because he exercised 6 days a week. I just told him to do some other kind of exercise and do less of it. The body does need to rest sometimes. His poor legs were crying out for rest but he kept working away on them. Yes, they were strong, but he was in constant pain so what’s the point of that?

I do believe in the healing power of rest but I also think keeping well exercised after an injury is also important. If you look at the injury history of Geraint Thomas –innumerable crashes that in 2005 led to a ruptured spleen, in 2013 to a fractured pelvis, in 2017 a dislocated shoulder and later, a broken collarbone – it’s clear that he took to extremes the advice that if you fall off your bike, the best thing to do is to get back on again. It worked big time. Despite all these injuries Thomas triumphed this year by winning the Tour de France. Exhilarating and an inspiration to us all.

Very often athletes can still achieve great things despite injuries that would knock most of us out. It’s our old friend the power of the mind. Sometimes though we have to learn to accept that even this isn’t enough. I wrote a blog last year about Andy Murray’s hip. I predicted he would never reach a final or semi-final again. Today as I write he is ranked 382 in the world. Even for such a fiercely competitive player, overcoming this hip injury is almost certainly beyond him. I would though, love him to prove me wrong.

Let's dance
Get with the program
What to do with covid deniers
How to help yourself and others survive the new lockdown
This crazy lockdown
Crunch time
The crazies
Life goes on
Surviving the lockdown
The beauty of scars
The Roaring Twenties
Truly, madly, deeply
Skin deep
Fat kids
Martial artist
Meet Rei Toska
Sperm alert
Pain is your friend
The spa massage
Of pillows and mattresses
How to live to be 100
New year, new you?
The tan line
Back pain
Feeling relaxed?
How old is your heart?
Tackling rugby
Why I stopped taking Omega-3
Belly watch (2)
Let's hear it for doctors
La dolce vita
The best massage ever
Belly watch (1)
Trust me, I'm a doctor
Life in the balance
The fear of taking our clothes off
The London marathon
The mystery of darts
In praise of slow
Drugs, alcohol and the waste of life
A little of what you fancy...
Open water
The iPhone and massage
The swimmer's body
Happy with yours?
Cut the fat, Santa
The pre-flight massage
Big guys
Thin people
Fat people
Kyphosis – the curved back
Massage and osteopathy
Torture and the foam roller
Let's dance!
The authentic voice
Killing a lobster
Why (most) PTs are a waste of money
Bored meetings – and how to escape them
The way of all flesh
These feet were made for walking
Lost in space
Fat but fit?
Let's do lunch
Can massage help reduce high blood pressure?
Andy Murray's hip
Stretching – and being stretched
Stop making excuses
How often should I get a massage?
Massage for the young at heart
Brain power
What’s your favourite muscle?
Watching the world go by
Muscles maketh the man
And stretch...
Hocus pocus and mumbo jumbo
Soft music, candles and hogwash
Why I won't treat obese people
The sandwich generation
How we see ourselves
The pain paradox
The full body massage
The limits of massage
Men and their bellies
Reading the body
The dangers of sitting
How much should a massage cost?
What's the point of having a massage?
What does it mean to have a healthy body?