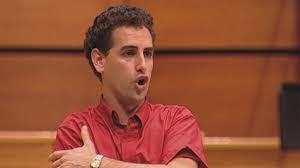 There may have been sympathy as well as gloating at the toe-curling embarrassment of Theresa May’s Conservative Party conference speech last week, but there was no getting away from the heavy symbolism of a woman choking on her own words. Watching as her authority drained away from her with every splutter and cough, we should all have been reminded of the power of the voice and how we are rendered impotent when we lose control of it.

As it happens, on the day of the speech I was reading Jeannette Nelson’s excellent Voice Exercise Book. Jeannette, a client of mine, is head of voice at the National Theatre. She talks about the importance of posture and breathing deeply, supporting the voice, freeing yourself of tension in the voice, and she gives tons of very useful exercises to help you find your voice and use it effectively.

I’ve sung in choirs now for 20 years and have always been interested in the voice and what I can do to produce a good sound in rehearsal and in the concert. A lot of singers will find their voice as they sing. I remember a concert given by the great Peruvian tenor Juan Diego Florez (pictured here) who started with a dominant nasal quality that was quite unpleasant. But a few songs in, he had relaxed, found his voice and won over his audience. I once asked him why he didn’t sing more lyrical opera – he is known for mastering the bel canto repertoire.  He said it was impossible to sing both – that lyrical singing used different parts of the voice and making the switch took too long and so he was obliged to stick with bel canto.

Most people think of the voice as if it is to do only with the mouth and throat. In fact it engages pretty well the whole body. As a massage therapist and singer, I’m very sensitive to voice and what it tells me about a client. When people come to me with tight, ungiving voices, I’ll work on their shoulders, scalenes and other neck muscles, their intercostal muscles and try to get them to breathe deep into the diaphragm. Massage breaks down tensions in the muscles, opening up cavities in the body that are so important for resonance. Tense muscles restrict the voice and change its quality.

Before Theresa May gave her ill-fated conference speech, it was widely seen as a chance for her to reassert her authority. She must have been unusually tense even without the added stress of a throat infection – and parts of the set dropping off. Jeannette Nelson makes the most salient point early on in her book: ‘Believe me, you will not engage your listeners fully … unless your voice sounds authentic – honestly yours.’ The authentic voice carries authority. Theresa May’s crisis of voice was also a crisis of heart – she will begin to convince as a leader when she finds her authentic voice.

Let's dance
Get with the program
What to do with covid deniers
How to help yourself and others survive the new lockdown
This crazy lockdown
Crunch time
The crazies
Life goes on
Surviving the lockdown
The beauty of scars
The Roaring Twenties
Truly, madly, deeply
Skin deep
Fat kids
Martial artist
Meet Rei Toska
Sperm alert
Pain is your friend
The spa massage
Of pillows and mattresses
How to live to be 100
New year, new you?
The tan line
Back pain
Feeling relaxed?
How old is your heart?
Triumphing over injury
Tackling rugby
Why I stopped taking Omega-3
Belly watch (2)
Let's hear it for doctors
La dolce vita
The best massage ever
Belly watch (1)
Trust me, I'm a doctor
Life in the balance
The fear of taking our clothes off
The London marathon
The mystery of darts
In praise of slow
Drugs, alcohol and the waste of life
A little of what you fancy...
Open water
The iPhone and massage
The swimmer's body
Happy with yours?
Cut the fat, Santa
The pre-flight massage
Big guys
Thin people
Fat people
Kyphosis – the curved back
Massage and osteopathy
Torture and the foam roller
Let's dance!
Killing a lobster
Why (most) PTs are a waste of money
Bored meetings – and how to escape them
The way of all flesh
These feet were made for walking
Lost in space
Fat but fit?
Let's do lunch
Can massage help reduce high blood pressure?
Andy Murray's hip
Stretching – and being stretched
Stop making excuses
How often should I get a massage?
Massage for the young at heart
Brain power
What’s your favourite muscle?
Watching the world go by
Muscles maketh the man
And stretch...
Hocus pocus and mumbo jumbo
Soft music, candles and hogwash
Why I won't treat obese people
The sandwich generation
How we see ourselves
The pain paradox
The full body massage
The limits of massage
Men and their bellies
Reading the body
The dangers of sitting
How much should a massage cost?
What's the point of having a massage?
What does it mean to have a healthy body?