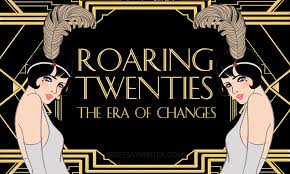 We’re back to the Twenties. Nice to have a name for the decade again at last. In France the Twenties (1920s) are known as the ‘années folles’ (crazy years). Of course, they came just after the first world war when about 20 million people died. It wasn’t as if the war ended in 1918 and they got back to dancing and making love in 1920. The enormous loss of that decade must have taken a generation or more to recover from. Still, the ‘roaring twenties’ were a period of great creativity – jazz blossomed, art deco peaked, and women won the right to vote (yes, hard to believe that’s how long it took.)

So now in the 2020s, instead of having the huge heft of a world war behind us, we have the awesome but real prospect of mass destruction, be that by means of nuclear devastation or through the already present earth-shattering effects of climate change. You have to admit, human beings have done a remarkably thorough job at ensuring their own self-destruction. And despite knowing that every new weapons development would take them further from their goal of security, and despite knowing all the science that linked man’s actions to global warming, they still mustered the audacity not to change.

We carry on our lives for the most part as if none of this were happening; we read about terrible fires in New South Wales, then the next moment, wonder if we need to buy coffee or we forgot to pay the contents insurance… oh, and that job promotion could come about this year. It’s not that we don’t care – it’s more that it’s just too big a thing to keep on thinking about. What can we do about it – apart from use fewer plastic bags or eat less red meat?

Climate scientists speak of ‘a tipping point’ when global warming will have gone too far to be reversible. Likewise, we stand on the brink of developing strategic nuclear missiles that are undetectable and therefore cannot be intercepted. Human decision-making has become subservient to technological 'decisions'.

But I think people too can reach a tipping point when their personal safety is sacrificed for a greater idea. It is happening now in Hong Kong and in protests in Iran and Russia and in Lebanon, Spain, Chile and Bolivia. In 2018, between 1.2 and 2 million US citizens protested against guns. In the UK last year, more than 1 million people protested against Brexit. Protests against the inaction of governments on climate change are still in their infancy but this decade will see them grow and ordinary people will demand that action is taken and the longer they are ignored, the angrier and more vociferous will they become. It will be known again as the decade that roared, the Roaring Twenties.

Let's dance
Get with the program
What to do with covid deniers
How to help yourself and others survive the new lockdown
This crazy lockdown
Crunch time
The crazies
Life goes on
Surviving the lockdown
The beauty of scars
Truly, madly, deeply
Skin deep
Fat kids
Martial artist
Meet Rei Toska
Sperm alert
Pain is your friend
The spa massage
Of pillows and mattresses
How to live to be 100
New year, new you?
The tan line
Back pain
Feeling relaxed?
How old is your heart?
Triumphing over injury
Tackling rugby
Why I stopped taking Omega-3
Belly watch (2)
Let's hear it for doctors
La dolce vita
The best massage ever
Belly watch (1)
Trust me, I'm a doctor
Life in the balance
The fear of taking our clothes off
The London marathon
The mystery of darts
In praise of slow
Drugs, alcohol and the waste of life
A little of what you fancy...
Open water
The iPhone and massage
The swimmer's body
Happy with yours?
Cut the fat, Santa
The pre-flight massage
Big guys
Thin people
Fat people
Kyphosis – the curved back
Massage and osteopathy
Torture and the foam roller
Let's dance!
The authentic voice
Killing a lobster
Why (most) PTs are a waste of money
Bored meetings – and how to escape them
The way of all flesh
These feet were made for walking
Lost in space
Fat but fit?
Let's do lunch
Can massage help reduce high blood pressure?
Andy Murray's hip
Stretching – and being stretched
Stop making excuses
How often should I get a massage?
Massage for the young at heart
Brain power
What’s your favourite muscle?
Watching the world go by
Muscles maketh the man
And stretch...
Hocus pocus and mumbo jumbo
Soft music, candles and hogwash
Why I won't treat obese people
The sandwich generation
How we see ourselves
The pain paradox
The full body massage
The limits of massage
Men and their bellies
Reading the body
The dangers of sitting
How much should a massage cost?
What's the point of having a massage?
What does it mean to have a healthy body?