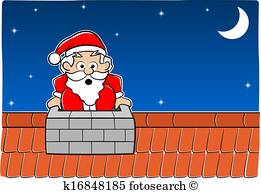 Santa has always made me feel a little uneasy. Even as a kid, I didn't want a big fat man with a white beard and dressed alarmingly in red sitting me on his knee as I was urged to put up with each year when we visited department stores. I imagine that particular 'tradition' has died a death since Saville. I hope so.

One of my uncles looked very much like Santa Claus in civvies – and when I was six or seven I was in awe of the enormity of his tummy. How did he carry that around with him, I wondered. I understood that Santa was fat because he ate so many mince pies and quaffed so many glasses of sherry. In fact, it's been calculated that on Christmas night, he consumes 90 billion calories. Santa's problem is that the exercise he does – going down chimneys and climbing back out – isn't enough to burn more than 45 billion of those calories. Hence the need for loose fitting garments.

It's a pretty common problem. As my partner always says: 'Abs begin in the kitchen'. I have recently put on some weight and although I exercise most days, I'm not doing enough to counter the indulges of the day. This time of year is supposed to be one of indulgence and although I don't feel I am eating much more than I normally do, there are all sorts of temptations lying around – homemade chocolate truffles (homemade = good for you), mince pies just out of the oven (oh, just one then...), fragrant panettone (it's so light, what do you mean, it's full of butter?), vintage port (good for the voice), puddings galore (rude to refuse)...

It's not that I'm greedy – I just love eating!

I enter the festive season already in deficit and of course as everywhere else, Islington's gyms and pools are closed. So this morning, before guests start to arrive and I get distracted and my self-discipline collapses, I'm going to go on Youtube and do some Joe Wicks exercise routines. If you don't know them, take a look; they're terrific – apart from all that shouting... I may have to wear my Santa hat over my ears.

Let's dance
Get with the program
What to do with covid deniers
How to help yourself and others survive the new lockdown
This crazy lockdown
Crunch time
The crazies
Life goes on
Surviving the lockdown
The beauty of scars
The Roaring Twenties
Truly, madly, deeply
Skin deep
Fat kids
Martial artist
Meet Rei Toska
Sperm alert
Pain is your friend
The spa massage
Of pillows and mattresses
How to live to be 100
New year, new you?
The tan line
Back pain
Feeling relaxed?
How old is your heart?
Triumphing over injury
Tackling rugby
Why I stopped taking Omega-3
Belly watch (2)
Let's hear it for doctors
La dolce vita
The best massage ever
Belly watch (1)
Trust me, I'm a doctor
Life in the balance
The fear of taking our clothes off
The London marathon
The mystery of darts
In praise of slow
Drugs, alcohol and the waste of life
A little of what you fancy...
Open water
The iPhone and massage
The swimmer's body
Happy with yours?
The pre-flight massage
Big guys
Thin people
Fat people
Kyphosis – the curved back
Massage and osteopathy
Torture and the foam roller
Let's dance!
The authentic voice
Killing a lobster
Why (most) PTs are a waste of money
Bored meetings – and how to escape them
The way of all flesh
These feet were made for walking
Lost in space
Fat but fit?
Let's do lunch
Can massage help reduce high blood pressure?
Andy Murray's hip
Stretching – and being stretched
Stop making excuses
How often should I get a massage?
Massage for the young at heart
Brain power
What’s your favourite muscle?
Watching the world go by
Muscles maketh the man
And stretch...
Hocus pocus and mumbo jumbo
Soft music, candles and hogwash
Why I won't treat obese people
The sandwich generation
How we see ourselves
The pain paradox
The full body massage
The limits of massage
Men and their bellies
Reading the body
The dangers of sitting
How much should a massage cost?
What's the point of having a massage?
What does it mean to have a healthy body?