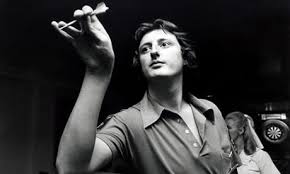 The mystery of darts

There are perhaps really only two mysteries in life: first, is there a God? And second, why do people watch darts? I expect to go to my grave not knowing the answer to either of these mysteries.

It used to horrify me when I was a kid that my dad would very occasionally watch darts on TV. Actually, the truth was he used to fall asleep watching darts on TV. Dads did that kind of thing. It perplexes me even now not only that anyone would want to watch it but that apparently so many people want to watch it that Sky Sports regularly broadcasts it.

For me, darts is a pub game. I even played it a few times and could appreciate the concentration needed to co-ordinate eye and right arm. Ok, it’s a skill and in a pub makes for a jolly half hour. But it ain’t no sport. Sport entails athleticism and I don’t call the capacity to raise your arm and throw a dart into a board athletic. Even downing 17 pints a day, as the five times world darts champion Eric Bristow apparently did, is not athletic. Though it is an extraordinary feat. As the old saying goes, you can take darts out of the pub, but you can’t take the pub out of darts. As a kid I thought having a huge gut was a pre-requisite to being a darts player.

Bristow died this week at the age of 60 from a heart attack. ‘Darts is drinking’ is how Bristow himself summed it up. He not only drank to excess, he smoked ‘like a train’ a friend said. But reading what people wrote about him this week made me wish I had met him.

One said: “He understood what crowds wanted to see – he was controversial, he was a maverick, he spoke his mind and upset a few people from time to time, but the man in the street warmed to him because he was very much one of theirs.”

A fabulous testament and it made me ask myself (not for the first time) why it is that some wonderful people are driven to push themselves into an early grave. Well, that’s another mystery.

Let's dance
Get with the program
What to do with covid deniers
How to help yourself and others survive the new lockdown
This crazy lockdown
Crunch time
The crazies
Life goes on
Surviving the lockdown
The beauty of scars
The Roaring Twenties
Truly, madly, deeply
Skin deep
Fat kids
Martial artist
Meet Rei Toska
Sperm alert
Pain is your friend
The spa massage
Of pillows and mattresses
How to live to be 100
New year, new you?
The tan line
Back pain
Feeling relaxed?
How old is your heart?
Triumphing over injury
Tackling rugby
Why I stopped taking Omega-3
Belly watch (2)
Let's hear it for doctors
La dolce vita
The best massage ever
Belly watch (1)
Trust me, I'm a doctor
Life in the balance
The fear of taking our clothes off
The London marathon
In praise of slow
Drugs, alcohol and the waste of life
A little of what you fancy...
Open water
The iPhone and massage
The swimmer's body
Happy with yours?
Cut the fat, Santa
The pre-flight massage
Big guys
Thin people
Fat people
Kyphosis – the curved back
Massage and osteopathy
Torture and the foam roller
Let's dance!
The authentic voice
Killing a lobster
Why (most) PTs are a waste of money
Bored meetings – and how to escape them
The way of all flesh
These feet were made for walking
Lost in space
Fat but fit?
Let's do lunch
Can massage help reduce high blood pressure?
Andy Murray's hip
Stretching – and being stretched
Stop making excuses
How often should I get a massage?
Massage for the young at heart
Brain power
What’s your favourite muscle?
Watching the world go by
Muscles maketh the man
And stretch...
Hocus pocus and mumbo jumbo
Soft music, candles and hogwash
Why I won't treat obese people
The sandwich generation
How we see ourselves
The pain paradox
The full body massage
The limits of massage
Men and their bellies
Reading the body
The dangers of sitting
How much should a massage cost?
What's the point of having a massage?
What does it mean to have a healthy body?