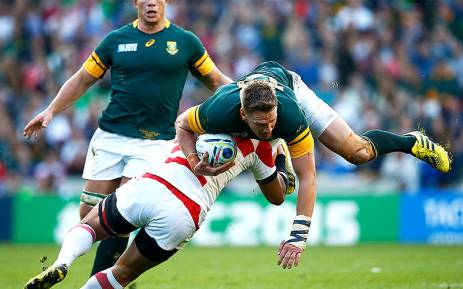 When Welsh international rugby union player Sam Warburton made his shock proclamation to quit at the age of 29 following last season out with neck and knee surgery, he joined an ever growing list of international players to hang up their boots in 2018. Rugby, in case you didn't know it, is one hell of a dangerous sport.

I often get clients who played rugby at school or university and they are coming to me with chronic injuries they picked up while toughing it out on the rugby pitch. It seems if you have a rugby background, it's very likely to stay with you for the rest of your life. But in a good way too. Because nearly every former rugby player I've ever treated - I'm talking amateur players here - still has an underlying physical strength and hardiness. So your injuries plague you for years but at least your body is still strong enough to cope with them.

Given how many injuries rugby players sustain, it's not surprising that the bodies in charge of the game are now - belatedly - experimenting with ways to make the game safer. Until now, rugby players have been able to tackle up to the height of the shoulders - though it's easy to catch players tackling by putting their arm around the opponent's neck. The height of a legal tackle in rugby union will be lowered next season in a significant trial designed to make the game safer. Governing body World Rugby has already started a similar trial with the height of the tackle in the World Rugby Under-20 Trophy moved from "the line of the shoulders to below the nipple line".

Hopefully this will mean fewer rugby players having to bow out early. Though personally, I've always thought chess was a far safer option.

Let's dance
Get with the program
What to do with covid deniers
How to help yourself and others survive the new lockdown
This crazy lockdown
Crunch time
The crazies
Life goes on
Surviving the lockdown
The beauty of scars
The Roaring Twenties
Truly, madly, deeply
Skin deep
Fat kids
Martial artist
Meet Rei Toska
Sperm alert
Pain is your friend
The spa massage
Of pillows and mattresses
How to live to be 100
New year, new you?
The tan line
Back pain
Feeling relaxed?
How old is your heart?
Triumphing over injury
Why I stopped taking Omega-3
Belly watch (2)
Let's hear it for doctors
La dolce vita
The best massage ever
Belly watch (1)
Trust me, I'm a doctor
Life in the balance
The fear of taking our clothes off
The London marathon
The mystery of darts
In praise of slow
Drugs, alcohol and the waste of life
A little of what you fancy...
Open water
The iPhone and massage
The swimmer's body
Happy with yours?
Cut the fat, Santa
The pre-flight massage
Big guys
Thin people
Fat people
Kyphosis – the curved back
Massage and osteopathy
Torture and the foam roller
Let's dance!
The authentic voice
Killing a lobster
Why (most) PTs are a waste of money
Bored meetings – and how to escape them
The way of all flesh
These feet were made for walking
Lost in space
Fat but fit?
Let's do lunch
Can massage help reduce high blood pressure?
Andy Murray's hip
Stretching – and being stretched
Stop making excuses
How often should I get a massage?
Massage for the young at heart
Brain power
What’s your favourite muscle?
Watching the world go by
Muscles maketh the man
And stretch...
Hocus pocus and mumbo jumbo
Soft music, candles and hogwash
Why I won't treat obese people
The sandwich generation
How we see ourselves
The pain paradox
The full body massage
The limits of massage
Men and their bellies
Reading the body
The dangers of sitting
How much should a massage cost?
What's the point of having a massage?
What does it mean to have a healthy body?